It was the last time he’d play a football game as a Bear and my heart was heavy. His lasts are also my lasts.

Sometimes we get so focused on celebrating the firsts, we forget to savor the lasts. This was one of the great life lessons I had hoped to teach my boys…to know life was like a big book made up of many different chapters full of sadness, joy, bitterness, sweetness, tragedy and miracles. Everything weaves together to make one beautiful story. Our story. His story. We have to know not to let ourselves get stuck in the junk of life or we’ll miss the sweetness because life always throws both.

If you’ve gone through it…you’ll understand.

If not, prepare yourself because it’s coming. You’ll blink and it will be here. Senior year.

This night was about me just as much as it was about him. Only I couldn’t really say that. This was his time. But his lasts are also my lasts. It was bittersweet. It made me sad too. But you get it don’t you? 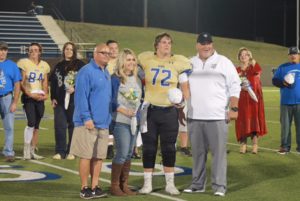 Since the boys were little I’ve tried to be mindful of the “lasts” and pay attention and savor those sweet last moments which mark the ending of a chapter. The firsts are important too but those are usually more sweet. The lasts – that’s the hard stuff. Something significant is ending. Like the last time your sweet one crawls up to sleep in your bed or the last time they want to snuggle on the couch while watching a favorite movie.  You can’t stop the lasts from coming but sometimes, you’d love to push pause or slow things way down to get just a little more time.

Like most parents, for years we’ve poured our hearts into our boys. Making sure we were always where they needed to be or had the things they needed to have. We attended almost every single game of their lives. If one of us couldn’t be there the other one was.

Scott was at almost every single one of his practices since he started. He coached him until he got to school ball. During high school, for almost every single practice Scott was there and at the end of practice he’d be standing at the top of the ramp waiting to meet him. To tell him great job or just tell him he loved him.

That sweet little blonde headed cutie was now a senior. A captain. The center and a defensive end. Number 72. My sweet precious #72. At 6’1 and 240lbs, he towered over his dad and I. He got the honor of being the football homecoming candidate and was voted Homecoming King and Best All Around for his senior class. So much sweetness and the year wasn’t half way over but it was closing in fast. Too fast. 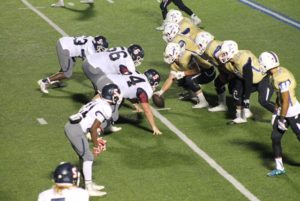 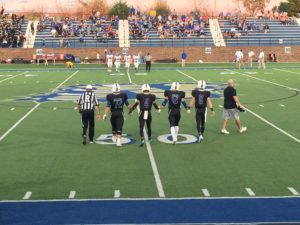 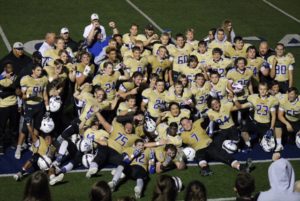 Sweet victory after the Shawnee game!

Now here we were…

His very last game as a Bear. Ever. Our first playoff game in nine years and we were hosting. Only a few minutes left. We were losing and there wasn’t any coming back. We fell apart and didn’t play our best game. I put my camera away. I didn’t want to have my eyes behind the camera for this last part. I wanted to watch and savor the last few moments I’d ever see my son play as a Bear on his football field. The same field he had played home games since he was four years old. The same field his cousins played on (older and younger). The same field he had watched the older boys play on and dreamed of one day playing on.  The same field Scott and I (powderpuff) and our family members had played while in junior high and high school before we were married.  This field represented so much of our lives.

As the game ended my heart was heavy. That was it. He had spent 13 years of his life playing football as a Bear and now it was over. His coaches are great and we love them. Some of them had even known him since he was a baby. Some of these boys had been his teammates since he was four. They sometimes fussed but held each other accountable and to higher standards.  They had each others back. They were a family. His sweet cousins were on the field too. They cheered while he played. 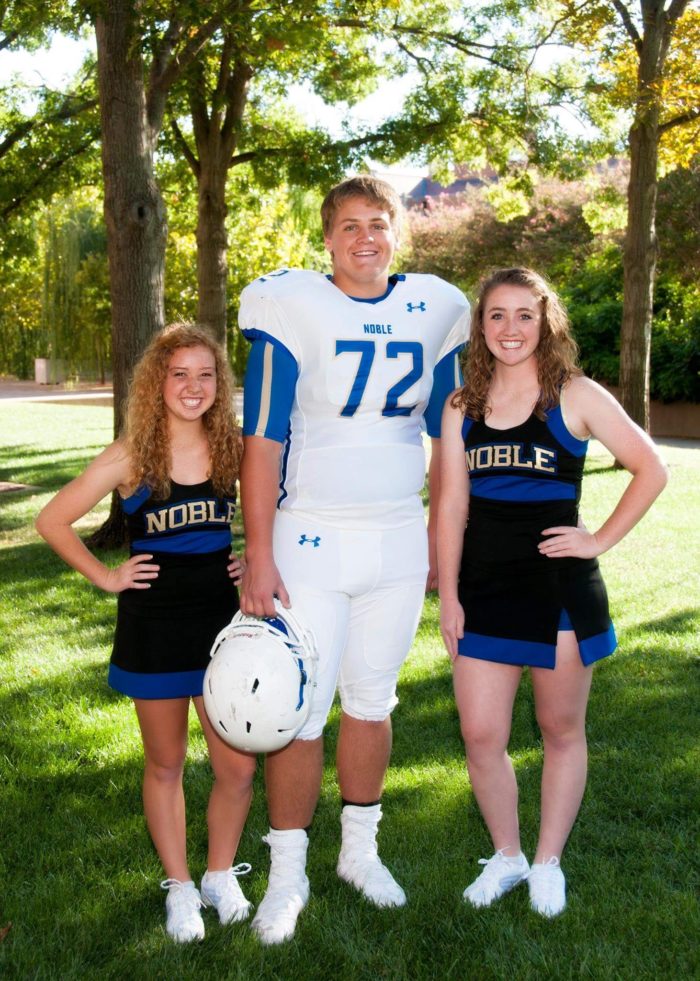 Senior year and his sweet cousins were cheering. Jacey, Madden and Kaylee.

I hoped at seventeen he knew enough to savor the sweetness. When the game was over, I saw nothing else. Only him. I watched as he walked through the line, shaking the other team’s hands. I watched as he found his place with his team and coaches and held up his hand representing a bear claw as the band played the familiar song. He was facing the crowd as a bear for the last time. Just as I stood in the crowd facing my son holding up my hand representing the bear claw for the last time. As soon as the song was over most of the others ran to the locker room. He was still down field. At most games he tended to be one of the lasts off the field just before the coaches.

I watched. I didn’t want to take my eyes off of him. His helmet was in his right hand. He walked his confident stride but his head wasn’t reflective of the beating we had just taken. No. He held his head high. The stands were almost empty. Most of the crowd had left way before the game ended. As he walked, he looked to the home stands. His eyes slowly scanned. Who is he looking for? I kept watching. His eyes continued to slowly scan. He turned to the visitor’s section and slowly scanned that area too. His head turned back to the home side. He kept looking all around. He kept his pace.

I kept watching him thinking …I hope he knows how special all this is. He approached the ramp. The same ramp he had ran up and down numerous times over the years. The same ramp his dad had waited after every practice and home game. He started up the ramp but he turned backwards and stared at the field as he moved up the ramp for the last time. Oh my heart. 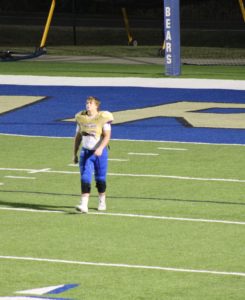 My sweet Mad, #72 walking the field in his Bear uniform for the last time.

My heart ached and tears started to fall. Tears of pride, tears of sadness and tears of joy. That was the last time I’d see my sweet #72 suited up in his beloved Bears uniform. Next year there would be a new #72.

But tonight my #72 got it. He understood…

This night, this moment wasn’t about tonight’s loss. It was the last of a very sweet and significant chapter of his life. He would soon have a start to another beautiful chapter. But for now he was savoring the last. It made me proud and warmed my heart.

He got it. Probably more than I’d ever know.

When he came back out from the locker room still in his uniform and wrapped his sweaty stinky arms around me just before walking his field one last time he said “I love you momma.”

Well …you get it don’t you?