Have you ever loved something so much and then been scared you might be seeing it wrong? Like maybe you drank the crazy scary Kool-Aid?

We had taken off work and headed to Dallas for our first essential oil convention. We didn’t know what to expect. All we knew was that we loved these oils and we were seeing crazy stuff that we couldn’t explain. We wanted to know more. And it was a girl’s trip! Who couldn’t use a girl’s trip? Three women. All three of us went to high school together. Toni and Erika graduated the same year. I was the year before them. Toni and I are cousins by blood but because of the theft of addiction – we’re truly sisters. Especially at heart. Toni and I are registered nurses and have been for more than 20 years. Erika was a pharmaceutical Sales Rep for twenty plus years.

Erika also happened to be my husband’s ex high school love. Aren’t we supposed to hate each other? I keep saying I’m going to write about a funny crazy high school memory that still makes me laugh but I haven’t yet. Here’s the skinny… 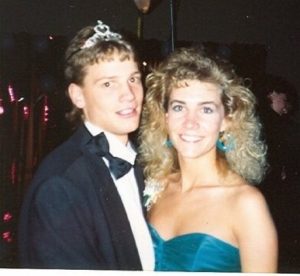 Scott and I – Prom King and Queen. I wish I had a picture of Erika in her red dress.

It was our Senior year and Scott and I had just been crowned Prom King and Queen. We were on the dance floor dancing to the song that had been selected for the crowning… “Lady in Red.” Only, I was wearing a green dress. Guess who was dancing right next to us…in a RED dress. Guess who was super cute and had all the cute moves? She went on to be a college Pom and she could dance. You guessed it! Erika! His ex. CRAZINESS! And now, she’s my good friend and one of my oil partners. Crazy, huh? It makes me giggle. The sweetness and the crazy.

We arrived in Dallas, found our room and scoped out everything. We found our way to the opening event. The grand auditorium was packed full of other oilers. There were so many people that they had to have two back to back conventions that year. We were so excited. We watched. We listened.

It was lively, joyful, different and a little strange. We were packed in a convention center with thousands of other oilers. I’m not talking oil and gas oilers. I’m talking essential oilers. You know, the hippies, the weirdos with their snake oils. For three people…two registered nurses and a pharmaceutical sales rep who had been submerged in the healthcare system for more than twenty years each…this was a little weird. Okay, a lot weird. There were people singing and dancing. They were walking the stage in formals while people cheered and the fun energetic music played. They spoke of wellness, purpose and abundance.

We leaned into each other and one of us said (I don’t remember which because we were all thinking it) … “Uh…I think we’ve joined a cult or drank the Kool-Aid.”  This wasn’t like any convention or conference any of us had ever been too.

What was that smell? Oh, my that smell! It went straight to my heart and brain and I felt this warm comforting sensation go all over my body. I kept deep breathing because the more I took in the better I felt. Oh, crap! We were being gassed. We were in a cult!   Wait! No, we weren’t being gassed.  It was Northern Lights Black Spruce essential oil.  They were diffusing it and it was delightful.

We laugh and we giggle now. But I’m not going to lie. We truly were a little nervous at that first  convention. We were in a whole new world and it felt amazing.

We had already fallen in love with the oils. We had experienced personal testimonies in our own lives. Miracles to us. We watched each other as we each experienced our own little miracle. We thought they were snake oils and never REALLY expected them to work. I mean…I’m a registered nurse and my mother’s side of the family is full of nurses. I had never known anything besides traditional medicine. I administered lots and lots of medications daily when I worked in the hospital. We treated sick people. I’ve never been a big medicine user myself but the year before this convention I had a liver resection to remove a cyst that was thought to be cancer. Prior to that I had never had surgery. I had been working out and running and been in good shape prior to surgery. I recovered quickly and was back at work within 3 weeks. It wasn’t cancer. Yet. But it could have been in 7-8 years, they said. I believe modern medicine saved me. I took several prescription medicines while in the hospital and then post-surgery for a couple of weeks but nothing much after that. Occasionally I had taken ibuprofen but that led to a prescription of Prilosec. I knew how that little game worked. Take this for that. Add this because of that. Now add this for that side effect and it never ended. So, I decided I wasn’t going down that path until I had no choice. I’d find a better way. Addiction runs in my family. I’ve seen many lives destroyed because of medicine that was supposed to help but it ended up their bodies became dependent on them to function and eventually led to abuse, shame and lives being lost or taken.

So how did professional healthcare people get to a convention full of people using snake oils and nontraditional medicine?  How did we get to the point of where we were leaning into God’s plants, bushes and trees first as opposed to grabbing man-made chemicals that we had been taught during many years of education and in our professional carriers? For me, several years back I had started seeing the craziness. Our patients were on more and more medications and they were getting sicker and sicker. We were running drug interaction reports and there were so many interactions. Every patient had numerous drug interactions. So many so that our industry wasn’t paying attention so much. It was like the little boy who cried wolf. After you see every patient with so many interactions and you keep telling the doctor and nothing changes (doctors are frustrated with the system too), people quit sounding the alarm. It’s not that the doctors don’t care. A huge part of their teaching comes from the pharmaceutical companies. I’m not implying the doctors don’t research and don’t make their own decisions. I’m saying – we’ve got a messed-up healthcare system that Big Pharma and our insurance companies are driving more and more. Insurance companies are dictating what medicines can be taken and when patients can be discharged and readmitted to the hospital. Sure, the doctor has some say but he/she is frequently overridden by the insurance company. It may even be a nurse who works for the insurance company that goes against the doctor all in the name of money. Yes, we need balance but this is insane.

Soon after we were real believers in essential oils, we learned about compliance. The FDA was coming down hard on natural companies. Some of it I got. There are people who will spend their last hard earned dime on someone’s lies. But what infuriated me most was that when I spoke about essential oils I was unable to use words I used every day for the last 20 years in my nursing profession. Words like antibacterial, antiseptic, antifungal, wounds, burns, anxiety, depression, hypertension, diabetes, cancer, heart failure, COPD and so many others. Even though it is known that certain plants, trees, flowers and such have healing powers or certain properties like antibacterial, antiviral, antifungal, antiseptic – we are not allowed to say those things when speaking about our beloved oils.

We had to shift our speaking from diseased and sick to wellness and support. That was so hard for me. I wanted to scream. I almost never got it. Then as I worked at changing my language to be compliant with the FDA in speaking about my oils I started to change even more. I started realizing that after all these years, I’m not in healthcare. I’m in sick care. We push and seek pills like crazy. We look for a quick fix. Some of those fixes appear cheap but what we don’t realize is that they lead to more and more pills which increases cost and then our body starts reacting only we don’t realize it’s related to the pills and keep adding more. Eventually the cost is crazy even with insurance. Don’t even get me started on name brand vs generic. And you certainly don’t want to get Erika started. Or maybe you do. As a former Big Pharma rep, she can explain it way better than I can. Toni and I see the insanity more from the nursing side and how it affects our patients. How sometimes they must choose between food and medicine. No lie. Ask a home health nurse. They’ll tell you stories. Did you know that sometimes our poor elderly patients have chosen cat or dog food as their own food because they didn’t have enough money to buy food and their medications? Our whole focus isn’t on keeping people healthy. Our system is set up to wait until we are sick and dealing with diseases and treating those diseases and the symptoms of those diseases and sicknesses. Oh, man did my thinking shift.

After three years of living, seeing and growing in my essential oils I am now convinced I had drank the Kool-Aid. But not an essential oil Kool-Aid… a sick care Kool-Aid.  If you sit and watch, you’ll see it too. The insanity of it all is heartbreaking really. We are having more of a shift. More people are learning and seeking wellness. It’s been so encouraging to see how many healthcare professionals are jumping on board and having their own little miracles. Tons of nurses, nurse practitioners, physician assistances and doctors. We are on the inside. We see the craziness.

As Dr. Jim Bob Haggerton says – “you were created for perfect.” I believe this wholeheartedly. I believe God gave us beautiful medicine in the form of plants, trees, bushes and more.

I believe in modern medicine too. If I need surgery, have an accident or life threatening emergency, or have a diagnosis that I don’t believe there is another option – I want modern medicine. But for my wellness…I’ll stick with God’s beautiful creations.

All essential oils are not created equal.  Some oils contain toxins and junk. They aren’t all 100% pure even if they say they are. Make sure you are using the best quality.

Are you ready to get started on your oily wellness journey? I would love to help you get started.  If you use my member number (1807398) to purchase a premium starter kit I’ll send you some great resources.

Big Pharma’s medicine saves lives. But it destroys lives too.