You know those poor people whose picture ends up on the “People of Walmart?” Well, I have a new perspective (sigh)…

Nano (my mother’s sister who helped raise me) gave me two cute little lounging pants for my birthday. She called them “flower pants” and said they would be great for sitting in my favorite hammock swing. I love comfy! They were made of light and very colorful material. Perfect summer pants. I tried them on and they fit perfect. They weren’t something I would have purchased myself but I started thinking of the shirts I could wear with them and different outfit options.

Yesterday, Madden and I had some errands to do. I grabbed a pair of those cute little “flower pants,” found a matching shirt, put on my new makeup and styled my fun new hair (4 inches shorter). I asked Madden if I looked alright and specifically asked about my pants. He nodded. Off we went…to Sam’s, the flower shop and to Nano’s for some cake then headed back home.

I hadn’t seen Scott since before he left for work early yesterday morning. As we pulled into the driveway, I told Madden…“Your dad will say something about my pants.”  Scott always notices anytime I have something different on or do something different with my hair, makeup or anything. He always comments. Most of the time he compliments but occasionally he shares some off color comment that always makes me laugh. We both have a great sense of humor…especially when it’s about me! Ha, Ha!

Madden and I got out of the car and walked toward the house. Scott came out the door to meet us. He looked at me and immediately said… “What the heck are you dressed for? Bed?”

“Why are you wearing your pajamas?” he said as he giggled.

“Pajamas? What? These aren’t pajamas! Nano got me these pants.”  I didn’t know what the heck he was talking about.

Oh goodness! Nano got me these pants… I panicked!

Maybe they were pajamas. Did I seriously just wear freaking pajamas all over town?!?! I panicked some more!

Pajamas are my favorite clothes ever! But Nano didn’t call them pajamas. She said “flower pants” that would be “good to lounge in.”

I picked up the phone and dialed her number. “Hello?” She answered.

“Were those pants you got me pajama pants?” I asked almost before she could get her “hello” out.

“Oh my goodness! Why didn’t you tell me? I wore them out! I saw people!” I was mortified.

“Well honey, I thought you knew” she replied with a fun little giggle.

Holy Smokes! I wore “flower pants” all over town yesterday!

I thought about you yesterday and wondered if you’d show up today. I hoped so. You’ve become an odd little pop of joy for me. It makes my heart smile every time I see you. Especially the day you brought your friend or whoever it was. That was a really sweet gift!

This morning, on the one year anniversary of mother’s death…Scott went out to start his truck before work.

“Your friend is out there” he said as he walked back in and began gathering his things.

He clarified “your owl.”

You or maybe another owl have been coming for several years now. But when mother died – it changed.

The first time I remember seeing you after her death, I was intrigued. I had gotten up in the middle of the night and was getting a drink when I looked out the window and saw you hopping around on the ground. You were eating under the big light. The next morning I posted something about being frustrated about having been up in the middle of the night but was thankful for the blessing of seeing you. My friend “A” (who is Native American) commented something that grabbed my attention. We messaged and she explained how some Natives believe your arrival is the sign of an impending death. I struggled. I couldn’t handle another death just yet. I crazily asked my friend if it could be retroactive – maybe you were supposed to come before mother died but you were some crazy owl who had been late in your arrival. I chuckled at my crazy question. I know I sounded crazy. It was really late. I messaged my sister-in-law. She knew I was spinning. She tried to comfort me as my imagination was going crazy. I googled and googled and googled. I read all kinds of owl stuff. It made me crazier.

Several days later, a memory hit me like a ton of bricks. I was driving home from work talking to “T” or “K” on the phone. I can’t remember which. But I remembered as I was talking to one of them – an owl had flown across the road just a few feet in front of me and landed on a tree. As I continued talking on the phone, I turned the car around so I could get a better look. I pulled into a driveway close to the tree. I got out of the car, put the phone on speaker and opened up the camera app to take a picture. But before I could snap one – the owl flew away. Disappointed, I got back in the car and drove home. When this memory came back to me, I tried desperately to remember – was this BEFORE or after mother had died? “T” kept telling me I wasn’t a Native American so stop it. After my “crazy” calmed down, I remembered all of the people I had lost and had never seen an owl before their death. I felt better.

About 3 months after Mother’s death, two of you started showing up. I messaged “A” again and told her I was seeing owls like crazy. I told her the good news – no one else had died.

She came back with the most beautiful reply ever…

“It’s someone watching over you. Protecting you and your family. Someone who desperately wants to make sure the one amazing thing they did right is forever protected. Think of it like this…her spirit is free of any intoxicant that blurred her vision…she is the mother now she always wanted to be. But couldn’t break free from the monkey on her back that controlled her. Now she has wings on her back. Wings that have carried her back to watch over you and your family…giving you now what you needed all those years she wasn’t able to provide. She so loved you that her spirit peace resides in seeing you at peace…happy….free from that dread of THAT call you never wanted to get…but knew one day you would. She’s watching over the young woman she wanted to be for you, in you with your kids and she’s peaceful in doing so. Happy for the first time in many many years. And if there are two there…she’s showing you off to someone…proud of the woman you are. It’s a good thing Kandy. I hope you feel warmth love and peace when you see them. She’d want that too.”

I cried because her beautiful words were so comforting to my heart.

Two weeks later, on the thirty first anniversary of one of the most life changing events of my life…I looked out the kitchen window as I waited for my coffee and saw two owls sitting at the top of a tree right outside my window. I smiled as I remembered my friend’s precious words. A huge wave of joy filled my heart. That particular morning was the anniversary of my sweet Papa’s death. He had been everything to me before he had died. He had also been mother’s everything. I ran to my phone and snapped a couple of pictures. Then I opened my messages.  I read back over the beautiful words my friend had written. There was no way two weeks prior, she could have known the significance her words could have had.  I knew those two owls. And I cried a good cry! 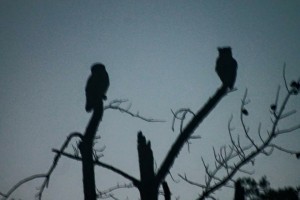 After that day – your presence became a gift.

Before mother’s death, you were coming in the mornings and only occasionally. But after that very significant day I noticed you were flying in EVERY evening at the same time. Sometimes I’d look out the window and see you sitting on the wood post at the garden or even eating on the ground. After I realized you were consistently coming, I’d go out before your normal arrival time and curl up in my favorite swing and wait for you to fly in. Soon, I’d look up and see you swoop in and land on a tree branch not far from me. You’d sit for a few minutes, watch me and then fly off.

Even if I didn’t see you this morning, I was comforted knowing you were here.

Thank you God for comforting me through your beautiful creations. I know my mother is at peace after years of a tragic life. Thank you for gentle sweet reminders.

No, I don’t believe in reincarnation. But I do believe God shows us things in different ways. Some see dragonflies, cardinals, white feathers and so much more. Some have dreams. Sometimes, children, strangers, family or friends say things or do things that are so innocent but yet so significant that you just know. They are sweet comforting gifts and sweet reminders.