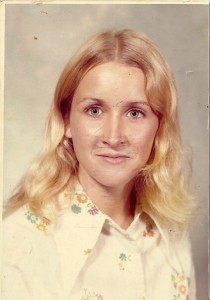 Wednesday evening, April 1st 2015 (yes – April Fool’s day), I received the dreaded news I’d been mentally trying to prepare myself for over the last several years. The one where I hear “they found your mother dead.” I know those words sound harsh and hard. Saying “passed away” sounds much softer. But that’s not what I heard because her life wasn’t soft and gentle. She didn’t just pass away.  Her death  was hard and tragic just like she lived. Addiction steals and brings ugly hard dark stuff.

Down deep, she was a scared, disappointed, lonely, hurt young girl. She covered it by drinking and drugging and showing her mean, hard, ugly ,scary junk. Some could see through to the kinder gentler person but not all got the chance.

No matter how much you try to prepare – you are never really prepared for the finality – no matter the circumstances.

This is one of my favorite pictures of her. She looks happy and still has a spark in her eye. It was before she became completely powerless to the substances that controlled her. It was before her life was so dark. It was before a little girl was robbed of her mother and before little boys were robbed of a grandmother they would really never know. She was also robbed. Probably more than any of us. She never got to experience the real joys of being a wife, mother or grandmother. I think back to all the things she missed in life. I don’t believe she ever made it to one of my boys games- little league through high school. She missed kindergarten graduations, Mason’s HS graduation, school programs, birthdays, my college graduation, the big stuff and the small stuff. I don’t remember her really being at much.

I believe she would have if she could have. She just couldn’t. She was submerged in darkness. My heart has always hurt for her and what could have been. She lost so much in this old world.

She had the best sense of humor and was one of the funniest people I’ve ever known. She always made me laugh. She was the most resourceful person I know. She thought she was one of the toughest people in the world and maybe she was.

I’m thankful my mother finally has peace and is whole again. I know she was God’s child and battled the ugliness for so long.

Sometimes we look at people like mother with disgust and judgment.  These people who suffer addiction face battles and darkness most of us you will thankfully never know personally.  It’s a terrible vicious cycle of darkness, dispare, hope, unforgiveness (of self and others) hard work and battle after battle after battle.

My prayers are with all of you (and your family and friends) whose lives have been forever changed because of this terrible tragic disease.

You can beat this. Reach for the light and surround yourself with people who lift you up.  And most of all forgive. Forgive yourself for everything you’re still hanging on too and forgive those who hurt you. God never intended for any of us to suffer through this.

Much love and hugs!