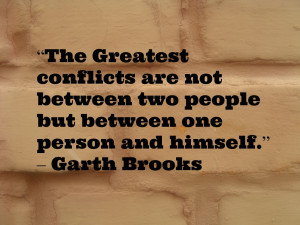 Sometimes our greatest conflicts are within ourselves. When we change ourselves we change our lives! One of my favorite quotes is…Insanity: doing the same thing over and over and expecting different results. That is truly insane!

Here are 9 lessons that can help you deal with conflict and can ultimately change your life:

If we want to grow, we must be real with ourselves. Whether we like to admit it or not, most all of us are hypocritical and talk out of both sides of our mouth on certain subjects. Oh sure, we tell ourselves we aren’t but when we take a real look we find out we haven’t been honest. We preach to others about things they should be doing but fail to do those things ourselves. Like when we want our kids to respect us but we fail to respect them. Or we say one thing and do the exact opposite. Look around you. You can spot it in other people. But it’s harder for us to identify it when it’s within us. Sometimes, after I have posted something that sounds awesome or inspiring but don’t realize I am struggling with it myself, God shows me how I need to improve in that area. That’s hard. It’s like when your kids take your favorite line and use it against you to make a point. I hate it when that happens but it’s a real opportunity for me to grow. Sometimes I ask myself, what would the people who feel like I have done wrong by them say about me in a particular area? It’s quite humbling to mentally walk yourself through what you think they might say. But you can’t do it when you aren’t real with yourself. It’s hard and it’s painful but it’s so worth it. Getting real is life changing. We’ll never grow or be the person we want to be until we get real with ourselves.

A lot of people build themselves up by tearing others down. You’ve seen it. It’s a great post and you are in agreement and just about to like it and then there it is…ugliness. They turned that beautiful meaningful post into ugliness. If only that last part would have been left off. Hostile people build themselves up by knocking others down. Why? Because it makes them feel better about themselves and it’s hard to be real. It means we have to acknowledge our own bad behavior and then make positive changes. It’s hard. We have to quit focusing on other people and turn inward. We have to look at our own ugly and do something different. It takes a really strong and wise person to be able to see themselves for who they really are. When we continue to make ourselves feel better by judging others harshly while giving ourselves a break…we are ultimately only cheating ourselves and those closest to us. We can’t see who we really are. We only see the good parts of us but we show others the junk. But the ugly judgmental parts of us will spill out and others will see them.

3. Stop being a victim

Blaming others for our short comings and circumstances is so much easier than taking responsibility for our own actions. It’s easier to focus on other’s faults and blame them for things. I could easily blame my mother or parents for everything bad that has gone in my life because they weren’t there for me or a hundred other reasons I could come up with if that is how I wanted to focus my energy. However, if I chose to do that, I’d only be robbing myself of a better life. There are things that are out of our control. But there is so much more that is in our control. So when we focus on the junk instead of focusing on the positive and actively creating better – well we end up being a victim with a victim’s mentality instead of being empowered and growing.   I’m thankful for all those people who helped me when my parents couldn’t. They helped me see a better way.

On that same note – I’m not implying we shouldn’t identify the disappointments and hurts and work through them. I’m just saying – keep moving. Don’t allow yourself to get stuck in the pain. Rise above it. Do something good with it. Grow and be empowered!

In my world, there have been lots of empty promises and empty words. I believe the intentions were there but still…empty promises and empty words. Sure they look and sound great but with no action they are meaningless. So as bad as it sounds, I don’t put a lot of stock in people’s words. It’s their actions that mean something to me. You know…Actions speak louder than words. I’m a huge believer in “showing.” People can say and write the most beautiful sounding things in the world but with no action they can be pointless. Or even worse when their actions are total opposite of their words. However the opposite is true for actions. A person can say nothing but do great things that mean so much. People of positive action impress me. Empty words can be frustrating. Show people what you want them to know.

“What you do speaks so loudly that I cannot hear what you say.” – Ralph Waldo Emerson

You know what’s worse than empty words? Actions that are the total opposite of what we speak. When we say one thing and do the opposite…that stinks! Make your actions match your words.

“What we have here is a failure to communicate.” – Captain (Cool Hand Luke)

Have you heard? Poor communication is the number one problem with relationships. When we use text, email, social media to communicate with others, there is a good chance things won’t come across as intended. With either party. You can’t see body language, tones or pick up on anything that might alert you that things are about to get crazy. Things are easily misinterpreted when we don’t speak to the person directly. Speak through the tough stuff. We have to communicate in an effective manner.

Many of us try to communicate with people in a language they don’t speak or understand. We sometimes have these long drawn out conversations with people and both parties walk away with a totally different take away. In the medical field we use “teach back” in an effort to avoid this. It is a great method of communicating. An example of teach back is to say something like…”So this is what I hear you saying…” Then you repeat what you think you heard the other person say. It gives the other person a chance to clear up any misunderstandings. Instead of just ending the conversation and thinking you got the point when in fact – you totally missed it.

Through mistakes, hard life lessons, seeking knowledge, surrounding myself with wise people and by the grace of God – I have gained wisdom. I’ve learned I do some dumb stuff. Sometimes we have dumb unrealistic expectations. Of course we will be disappointed when we have unreal expectations. If I had told mother she had to be clean for 30 days before I had anything to do with her – that would have been crazy. Of course, I think I might have done this in my younger years. Because I do crazy stuff. Thankfully I figured out that she didn’t have to be clean for any length of time. Otherwise – I’d never have spoken to my mother. My rule changed to – let’s talk when you’re clean. That was a better rule. The truth was – it wasn’t good for either of us to communicate when she was messed up. Sometimes we have dumb rules and dumb expectations. Don’t get me wrong, I would have loved for my mother to have had years of recovery but she didn’t. So instead of missing out on her sober self. I got to enjoy short glimpses.

Most of us want to be heard first. We want people to listen to us and what we have to say. We aren’t interested in understanding others. Empathetic listening is when we get inside another person’s frame of reference. We see the world from their perception, their view and you understand how they feel. Empathy isn’t the same as sympathy. Sympathy is a form of agreement. Sometimes people feed on sympathy and it can makes them dependent. Empathy is understanding that person – fully and deeply. It doesn’t mean you agree with them but you can understand where they are coming from. When I finally got to the place in my journey where I had empathy for mother – it changed my world. I lost the anger. I still cried, hurt and felt disappointment but I didn’t get so angry anymore. Having empathy is empowering too.

Boundaries are important to keep your sanity and for healthy relationships. There has to be rules. Just like earlier I mentioned, my rule (or boundary) was that I’d interact with mother on her clean days. That was a boundary I set to protect myself and my kids. When mother drank she was mean and ugly. The interaction was emotionally draining and took days to get myself back in the right frame of mind. I didn’t need that in my life nor did I want it. So I set a boundary to protect myself and my kids. It was also a good boundary for mother because with less interaction on those days – she had less to feel guilty about. And it protected her from the aftermath of dealing with my frustration and disappointments. It was just better all the way around to have that boundary. People can change and deserve to be forgiven – over and over again. Just like we deserve the same. However, you aren’t a rug. So don’t allow yourself to be treated like one. Set some healthy boundaries for yourself. If you keep finding the joy sucked out of your life when you are with a particular person or when you interact with them – limit the time you spend with them. It doesn’t mean you don’t love them or can’t have a relationship with them. But you need to stay healthy. Surround yourself with people who encourage and inspire you. People can and will drain you. Sometimes they will suck the life out of you if you let them. So protect yourself and them – have healthy boundaries!

You have to learn humility if you want to live the life of your dreams. Humility is not weakness. It is a quiet confidence. Think of the greatest leaders in the world – they possess humility. When people lack humility they are full of themselves and frequently tell everyone how awesome they are. It is hard to communicate with these people because they aren’t open to outside input and are so busy boasting about their own greatness that they are unable to learn from others. Learn humility or you will be humbled. Don’t be afraid to make mistakes. You’ll learn and grow from those mistakes. Be open to learning and growing. Some of my most favorite people are the most humble. They will never ever tell you all the great things they do. But if you watch them…you’ll see. That’s what makes them so awesome!

“It is not always about you. Embrace this and it will protect you from pain and open you to growth. There is always someone bigger, faster, stronger, and better looking. Attach to something larger than yourself, compare your growth not to others, but only your previous self. As you desire to balance and grow your life, you will experience failures along your journey, so you will be humbled. Respond with gratitude, learn, grow and keep pushing.”          – Oola Find Balance in an Unbalanced World.