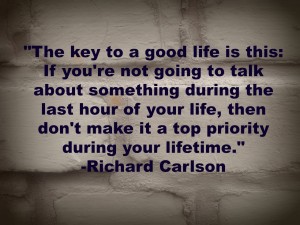 “The key to a good life is this: If you’re not going to talk about something during the last hour of your life, then don’t make it a top priority during your lifetime.” -Richard Carlson

Here’s the thing – time passes very quickly. Too quickly! The older I get the faster it goes. Sometimes I feel like it’s traveling at the speed of light. Especially as my boys have gotten older. Death has taken many people I love so I’m very aware… we are not guaranteed tomorrow. We have to make calculated decisions on where we invest our time and who we invest it with. So look around and assess what you are investing in.

Learn to say no but more importantly learn to say yes. Sometimes we say “yes” to things that don’t matter to us because we don’t want to disappoint people or don’t know how to say “no”. But other times we say “no” to things that are really important and really matter because we are tired and don’t feel like doing it right then. And sometimes we say no to those we love the most because we know – no matter what, they will always love us. Just like sometimes we give those we barely know the best of us and save the left overs for those we love the most. Isn’t that stupid? Can you imagine the regrets that will bring as we age or are on our death bed? Let’s not do that anymore. That’s kind of crazy and backwards.

So I challenge you – do an assessment. What are you spending your time on? Get rid of the things that don’t matter. If you aren’t going to be talking about them at the end of your life or if they aren’t creating or contributing to good – move them on down the list or get rid of them completely. And don’t be a fun hater….just going around saying no all the time. Do fun dumb stuff with those you love. I found an old video of M&M (Mason and Madden) and their friend. They took their grandmother “coning.” It is hilarious. They rolled into McDonald’s and ordered several ice cream cones. My mother-in-law was driving so when they handed her the last one, instead of her grabbing it by the cone – she grabbed it from the top – the ice cream. She acted like it was normal and drove off. It shocked the workers and everyone got a good clean laugh.  They made a great memory and we’ve laughed and laughed over coning.  Google “Coning” it’s quite funny.

These are two of my very favorite pictures. Why? Because they capture two very sweet moments for me.

This is one of my favorite pictures from last year. It was late. Way past my bedtime. Everyone who knows me knows I go to bed before most normal people. I always have even as a little girl. I like my bed. 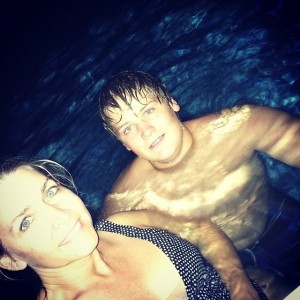 But this night was special! My sweet Madden asked me to go swimming and it was 10:30 at night and I was in bed! He was 15 at the time. Knowing he would soon be going to college and moments like these would be fading, I crawled out of bed and put on my swimsuit. We swam, laughed and told stories.   I love knowing what’s inside their sweet minds. What they are thinking, dreaming and hoping. What they are struggling with and what they are really enjoying. Not that they always tell me but when they do…I savor it. Madden got a little mad at me that night because I heard a noise and I screamed. I startled him. It made him mad which made me laugh and then laugh a little more.

This is the important stuff. So anytime I get an invite, I try to go. Here lately it’s been for late night ice cream runs. That hasn’t been such a great idea for my body but man do I love the time with my boys. 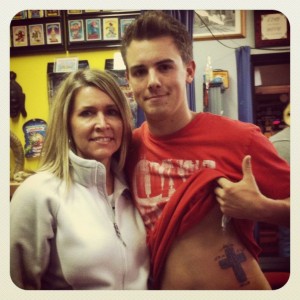 This picture captures another of my most favorite moments. For several years before turning eighteen, Mason wanted a tattoo. I tried to talk him out of it because I didn’t want him to get something at eighteen that he would regret at thirty. He had his mind made up and regardless of what I wanted for him – it was his body and I knew he was going to get one. Sometimes we just have to pick our battles. For me this wasn’t one that was a huge deal to me. So instead of missing it, I chose to be a part of it. For his eighteenth birthday, his grandmother (Scott’s mom) and I spent the evening at the tattoo parlor with him as he got his first tattoo. Holy Smokes that was an adventure in and of itself! Have you ever been to a tattoo parlor on a Friday or Saturday night? I learned things I never really wanted to learn. My mother-in-law and I got sent to the liquor store for the tattoo artist because he wanted some wine and he couldn’t make it there before the store closed. So we took his money, loaded up and went to buy his wine. We laughed a lot during that night. And I love Mason’s tattoo so much. It’s meaningful and sweet. It’s a cross with our last name across the top and then mine, Scott’s and Mad’s initials. A family tattoo. I love it! If I ever get one – I’d get one just like it. Later, after the tattoo – Scott took Mason to the casino for the first time because that’s what Mason wanted to do.  So we got to be a part of his night instead of fussing and telling him not to do those things.  In the grand scheme of things – Whatever!  It’s not about the tattoo or the casino. It’s about spending time with our boys and showing love.

Life is way too short. Sometimes we make big deals out of dumb stuff. Make sure you are saying yes to the sweet stuff and no to the junk. Because life really is too short.